A Formula One race powered by compressed air? Read on to solve the mystery. 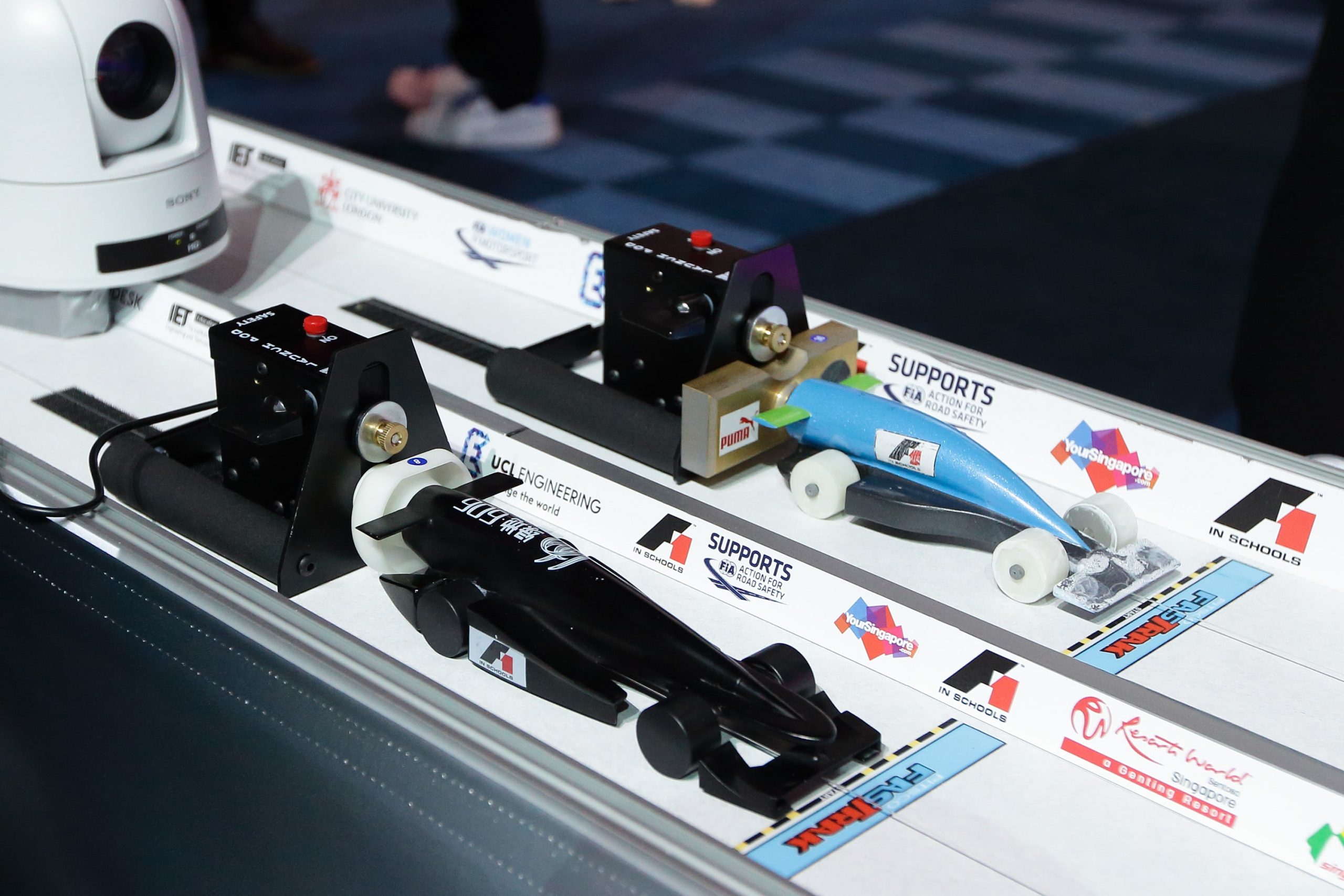 A blast of compressed air launches the race car onto the track. As every team fights its way to the finish line, the enthusiasm in the crowd puts any Grand Prix to shame. This is the testing ground for the world’s fastest miniature F1 cars. Don’t be fooled by the size. ‘F1 in Schools’ is no child’s play.

Formula One’s global initiative, F1 in Schools, is an exciting competition for students aged 9 to 19. It is an international STEM (Science, Technology, Engineering and Maths) platform that challenges teams to design, manufacture, test, and race miniature F1 cars powered by compressed air. Much like the original Formula One, the cars must conform to the stringent rules and regulations of the competition to qualify. Built out of balsa wood, the cars are scaled down to 1/20 the size of the original. Travelling at speeds of over 68 mph or more, the cars are capable of covering their course in one second or less! Although the race may last for only a second, it takes several months of hard work to build the car.

Students use Computer-Aided Design (CAD) technology to develop the fastest F1 car. The biggest challenge in designing a vehicle is beating the arch enemy of speed — ‘aerodynamic drag’. To understand what drag is, we must first acknowledge that the air around us is a fluid (just like water). When a race car speeds down a track, there is fluid friction between the car and the air molecules, causing it to slow down. To optimise the speed, it is necessary to ensure smooth airflow around the car. Any disturbance in the flow causes turbulence, adding to the drag.

Every aspect of a modern Formula One race car, from the shape to suspension, paint job to the driver’s helmet is aerodynamically designed. The streamlined shape of the car is instrumental in ensuring a smooth (laminar) flow of air with as little turbulence as possible. Teams participating in the competition use similar principles of aerodynamics, ingeniously incorporating fins, wings and grooves in their designs to direct the air more favourably to the wheels. The car is also tested in virtual wind tunnels to check the drag coefficient using Computational Fluid Dynamics (CFD). This helps them identify areas of turbulence and make corresponding changes to the design. 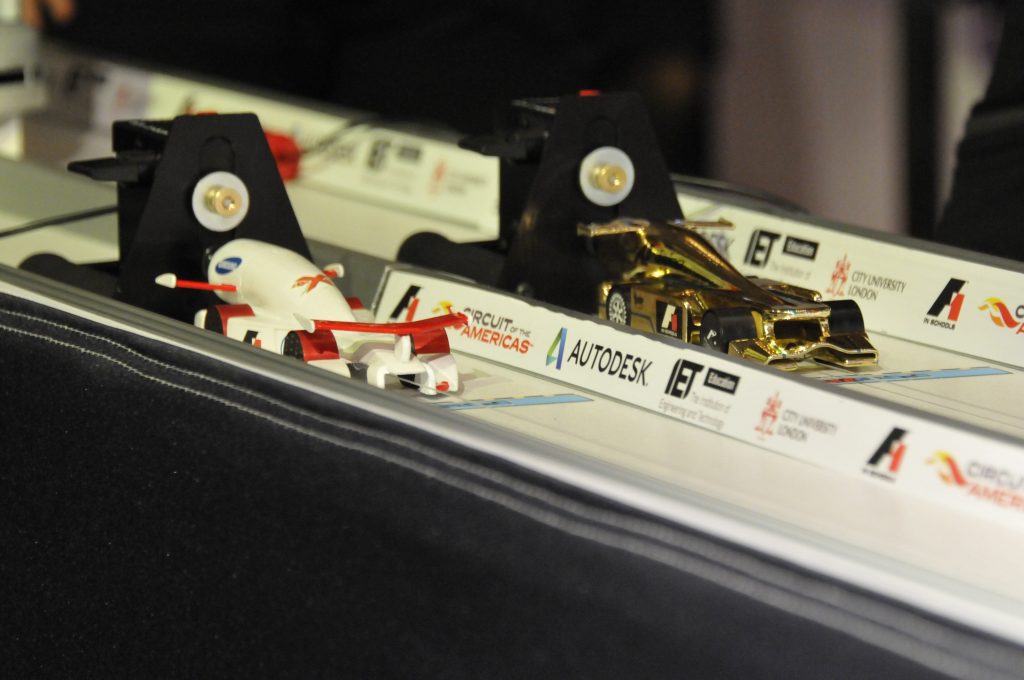 Using a 3D Computer Aided Manufacturing (CAM) software, a CNC router transforms the virtual design into reality. Instead of an engine, the car runs on compressed air (or compressed CO2 to be precise). A canister containing highly pressurized CO2 gas is placed at the rear. At the flick of a switch, the force of the gas leaving the canister propels the car forward. Regular compressed air can also be used to achieve the same result.

The F1 miniature is put to gruelling tests in wind and smoke tunnels before teams qualify to finals. The cars race on a 20 meter straight track, as every team attempts to break the one-second barrier. In 2016, an Australian school team broke the world record as the fastest miniature F1 car with a race time of 0.916 seconds! A brilliant feat, irrespective of age. This goes on to show the level of innovation and excellence at the competition. Every year, more than 20 million students across the globe attend the event, showcasing some of the most genius designs of our time. F1 in Schools encourages young minds to think beyond textbooks and invent. It is a stepping stone towards developing the ultimate race car of the future and completely changing the face of Formula One as we know it. It’s amazing what a piece of wood and a cylinder of compressed air can achieve.

The obvious question that follows is: Can modern cars run on compressed air? In the 1960s, an American company, Garrett (now Honeywell Turbo Technologies) attempted to build a dragster with a compressed air engine. However, this proved to be inefficient.  It takes a lot of energy to compress air and one would much rather put that energy towards directly propelling wheels (as in a traditional internal combustion or electric engine). The dragster was later modified to run on a mixture of air, alcohol and water. Even today, it seems unlikely that we’ll see a life-size dragster powered entirely by compressed air. But these splendid F1 miniatures will do just fine. 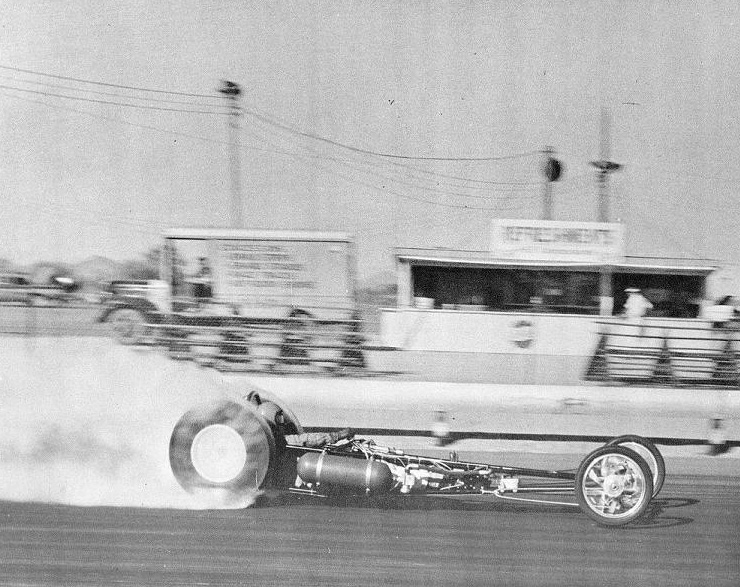