The extensive use of oil-free air in the making of biscuits. 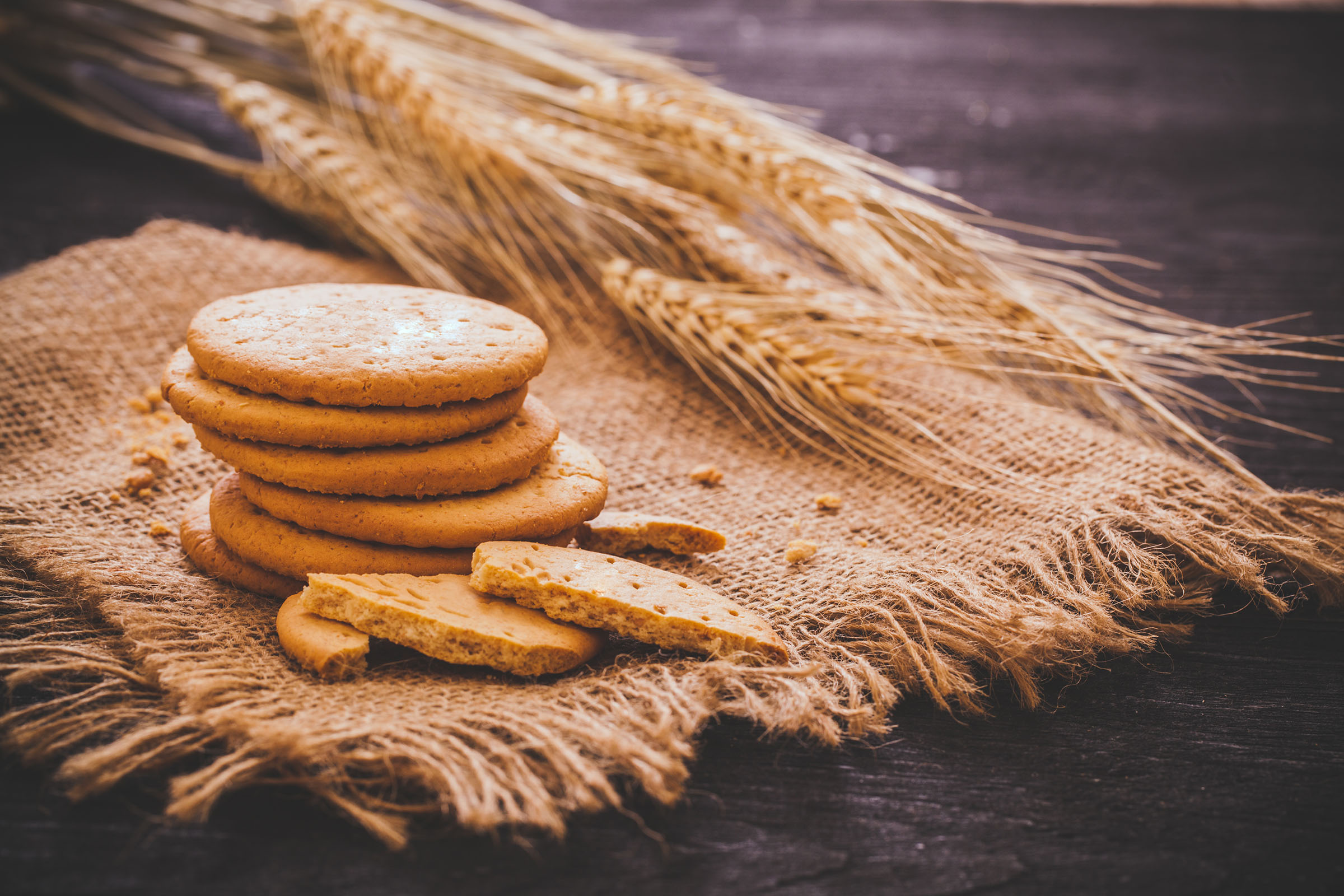 Biscuits have existed for a long while. Initially they were just hard, dried and unsweetened pieces of flour, baked in ovens and served as food for the poor. Around the 7th Century, the Persians began enriching the dough with eggs and butter; and adding flavours like sweetening them with honey. Gingerbread biscuits were the first flavoured biscuits, containing spices and becoming popular in Asia and Europe. 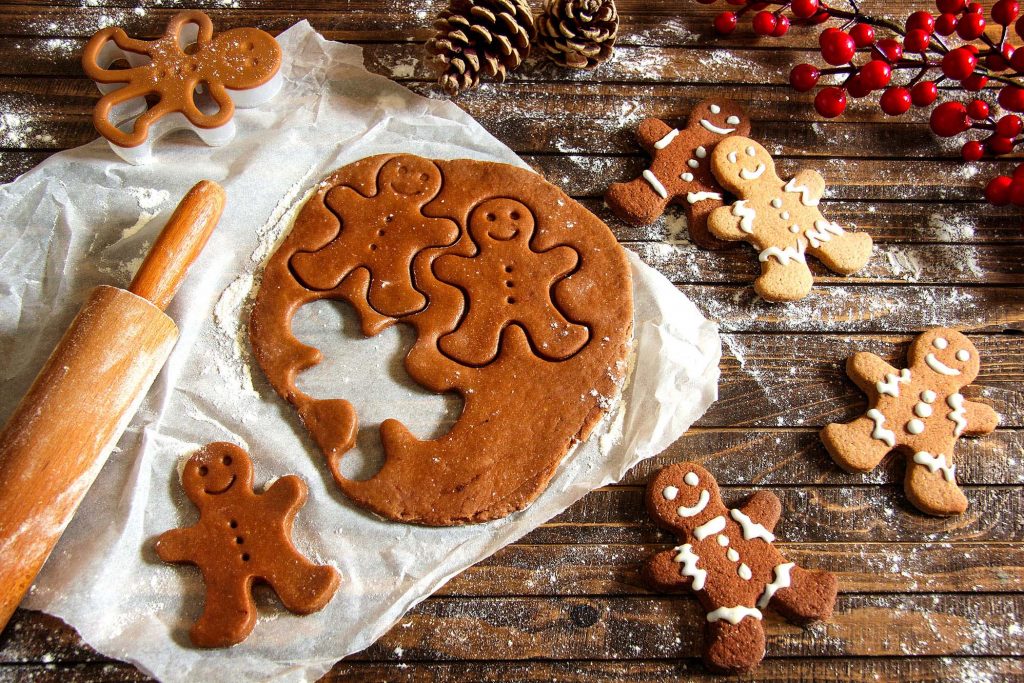 Gingerbread was the predecessor of the modern biscuit, and is still used today

The word biscuit comes from the Latin ‘bis’, meaning twice, and ‘cotus’, meaning cooked, or baked. Biscuit therefore means something that is baked twice. Why? Gingerbread was made from left over flour used to make cakes. That flour would remain in the oven and contain the flavour of the cake but become hard when baked again. Romans would carry dough that was baked only once as ration on their voyages, having the simple task of heating the dough again in ovens to consume wherever they journeyed. There’s lots of things that go into making biscuits

Depending on what biscuit must be made, there are many ingredients – milk, eggs, butter, honey, dried fruit and spices – stored in enormous storerooms in manufacturing plants, some even refrigerated. These ingredients are mixed together in large rotating spindles with multiple paddles that churn everything after added water. This creates the dough, a homogeneous mixture that is rotated until it reaches the right consistency. The biscuit dough is then sent to rolling drums that roll it into thin sheets about a meter wide. Moulds then punch out multiple kinds of biscuit shapes and add names and designs, preparing each individual biscuit to be baked.

From dough to ready baked biscuit on one large conveyor belt

Raw biscuits move on a conveyor belt into tunnel ovens, where oil-fired burners bake the biscuits as they move. With biscuits requiring 3 to 5 minutes to bake and the system always in motion, ovens need to be almost 250 feet long. Biscuits exit the ovens on the same conveyor, baked but lacking flavouring. Flavours and oil are added when the biscuits are fresh out of the oven and hot, post which they are weighed and packed automatically in identical, moisture proof packaging. 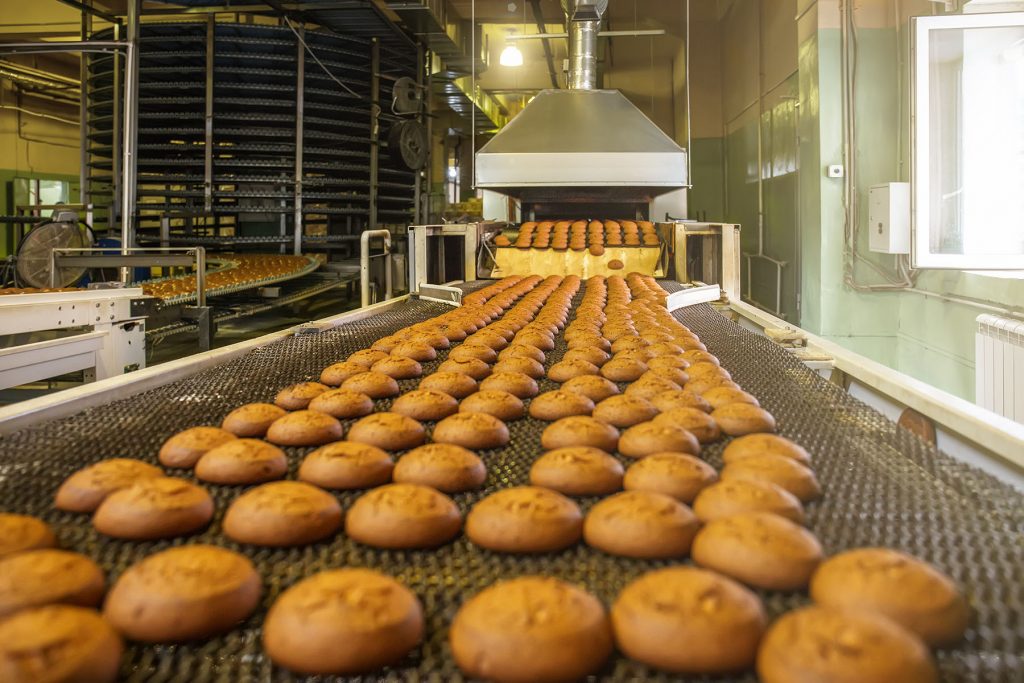 Tunnel ovens that are 150 feet long bake each biscuit for a few minutes.

Compressed air is one of the major utilities in the biscuit manufacturing process, being involved in the tippers used to move the dough, equipment used to dispense the required ingredient and in packaging where they power solenoid valves that are used to print wrapping foils. Compressed air required in the food industry is of three kinds. These are dependent on how much the air is in contact with the food that is being produced. ‘Non-contact low risk’ air is that air which does not encounter the food; and is at a low risk even if it does come in contact. ‘Non-contact high risk’ air is also air kept away from the food, but it carries a risk of contaminating the food if it gets in contact. Finally, there is the compressed air that does get used directly with the food created, called ‘Contact air’. Since this air is always around the food it should be as filtered and dehydrated as possible. Oil-free compressors are integral to the food industry

The requirement of pure, dry air is why oil-free compressors are the best solution for the food industry. ELGi has pioneered the development of oil-free screw air compressors which are commonly used in the biscuit industry in India and owns a major share of the Indian market.

Check out the entire range of ELGi products here.