Compressed air features across many processes of wastewater treatment. 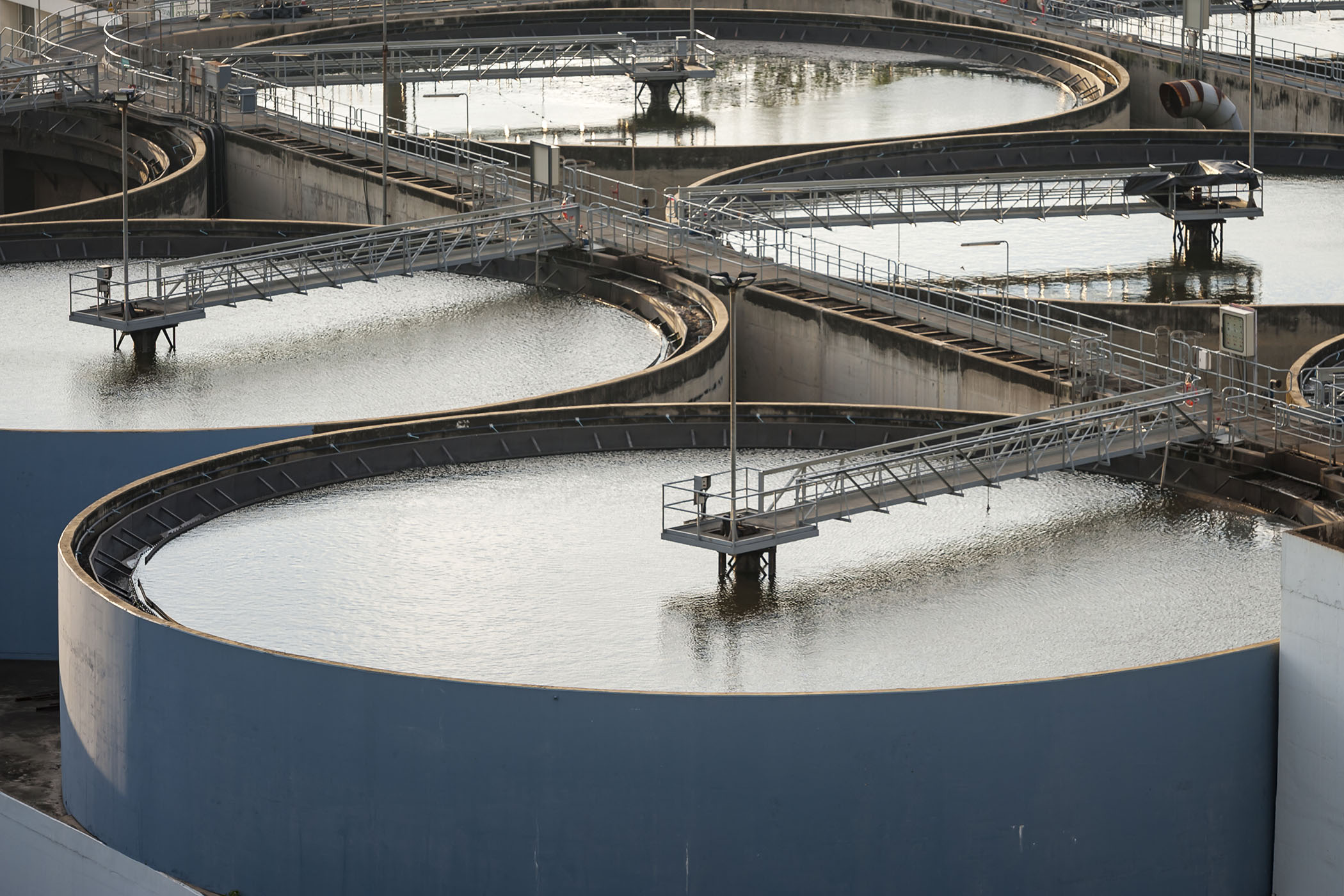 Water birds are among the easiest birds to observe, mostly frequenting open stretches of water with no obstructions, so they stand out. Sometimes water birds turn up in large numbers in urban areas. Remarkable looking flamingos, pink, long-necked and long-legged, flock to Sewri mudflats in Mumbai almost every winter. Pelicans, among the largest birds capable of flight and with extraordinarily large and extensible bills, have been sighted in recent years in the Pallikaranai marshes of Chennai. These large cities with intense human activity have water courses that are polluted. Why then do birds such as pelicans, flamingos and others congregate here?

The reason for this is food. Fish, worms, snails and other aquatic creatures and water plants such as algae and reeds abound, an entire food web flourishing in the water. But the water also contains unappealing material of mineral and biological origin, making water bodies of wastewater.

WASTEWATER AND ITS TREATMENT

Wastewater refers to any water that contains pollutants as a result of human activity, subsequently possessing undesirable qualities such as colour, odour, turbidity and the presence of pathogens. There is industrial wastewater and domestic wastewater. Normally, the sanitary sewers in a city carry a combination of these wastewaters, called municipal wastewater. Sewage is wastewater from residences only. Rainwater, is usually carried in storm drains that are not connected to the sewer system, but a small portion of the runoff tends to leak into sewers. 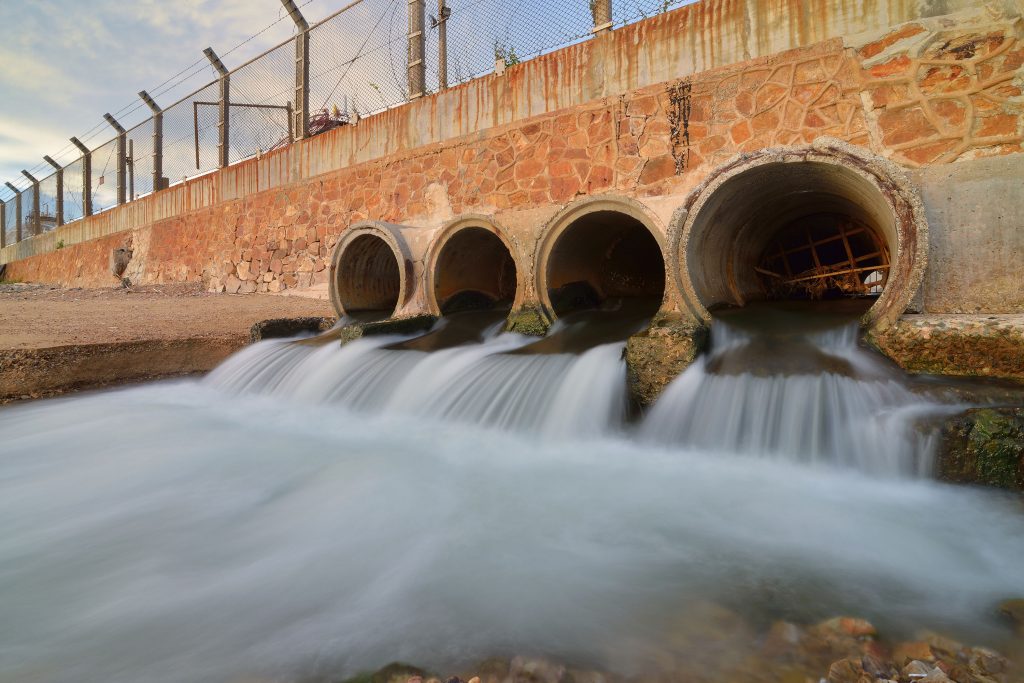 Laws in most countries prohibit the discharge of untreated wastewater directly into rivers, lakes or oceans. Toxic chemicals can kill or cause genetic defects in aquatic life. Heavy metals such as mercury accumulate in fish and affect the health of human beings who consume them. Pathogens cause illnesses when the water is used for recreational activities. They enter a city's water supply, which is not adequately treated and cause mass outbreaks, like the deadly 1993 Cryptosporidium outbreak in Milwaukee, USA , which sickened 400,000 residents and led to the death of over 100 people.

Organic materials serve as nutrients for bacteria, which consume dissolved oxygen in receiving streams, reducing their ability to support aquatic life. Wastewater must be treated to reduce the level of pollutants to within acceptable limits. Statutory bodies such as the Environmental Protection Agency (EPA) in the USA and the Central Pollution Control Board (CPCB) in India set the maximum levels allowed for various pollutants in the effluent from wastewater treatment plants. 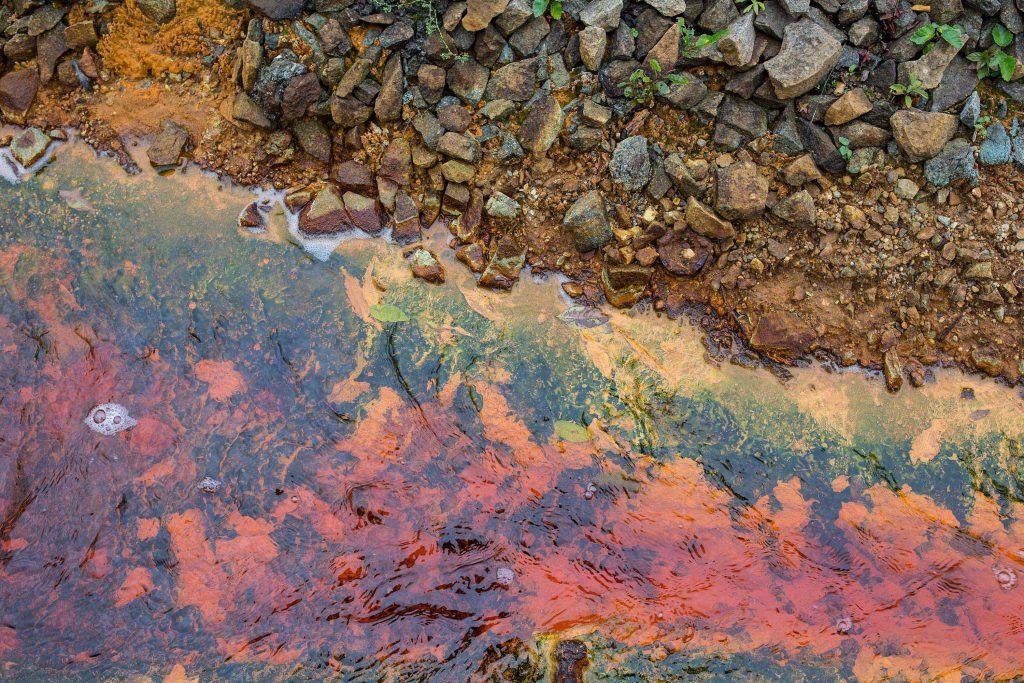 Toxic pollutants escaping a mine

Organic materials are a mixture of many different carbon-containing compounds, and so the tests to measure them are non-specific. The three most commonly used tests are total organic carbon (TOC), chemical oxygen demand (COD) and biochemical oxygen demand (BOD). BOD is the primary measure, being the oxygen required by microorganisms to oxidise the organic material present.

There are many processes that can be used to remove pollutants from wastewater. These involve physical, chemical or biological methods. Processes that use only physical methods are called unit operations (UO) while those using chemical or biological methods are called unit processes (UP). They always contain primary and secondary treatment stages, while a tertiary treatment stage may be present if a higher-quality effluent is desired. 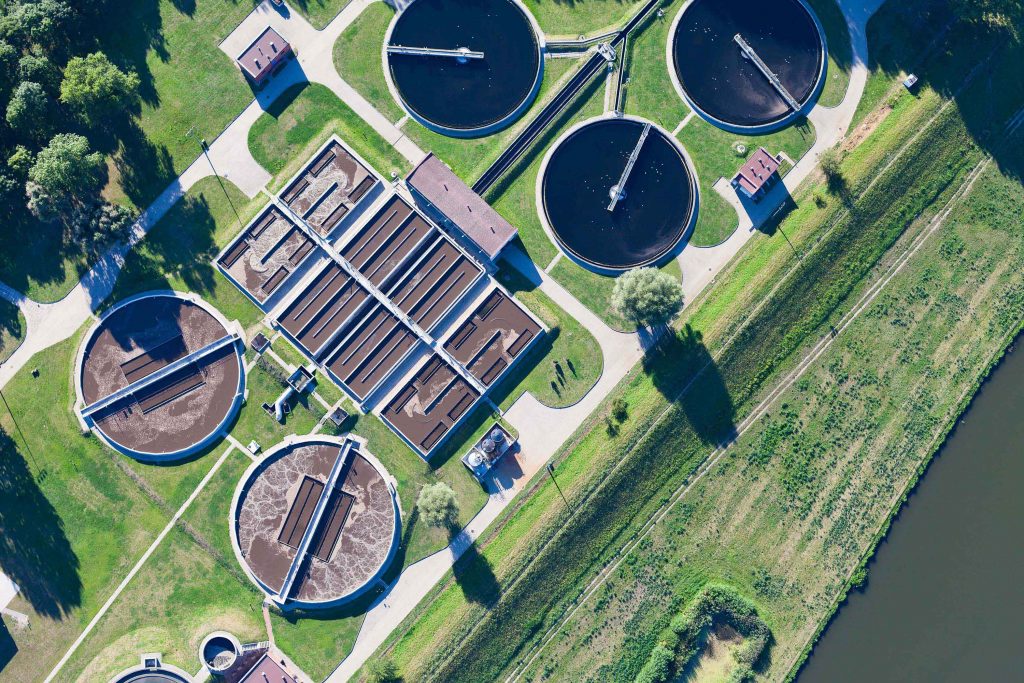 An aerial shot of a wastewater treatment plant

Screening is usually the first step where coarse screens are used to remove large objects such as cans, bottles and sheets of paper which are not biodegradable and which could damage equipment.

Flow equalization involves the use of a basin in which wastewater is stored and provided with adequate aeration and mixing (to prevent odour formation and sedimentation).

Sedimentation is used to remove suspended solids by means of gravity settling, using basins so the solids accumulate into a sludge at the bottom. Liquids that are lighter than water, such as oil, are skimmed from the surface. 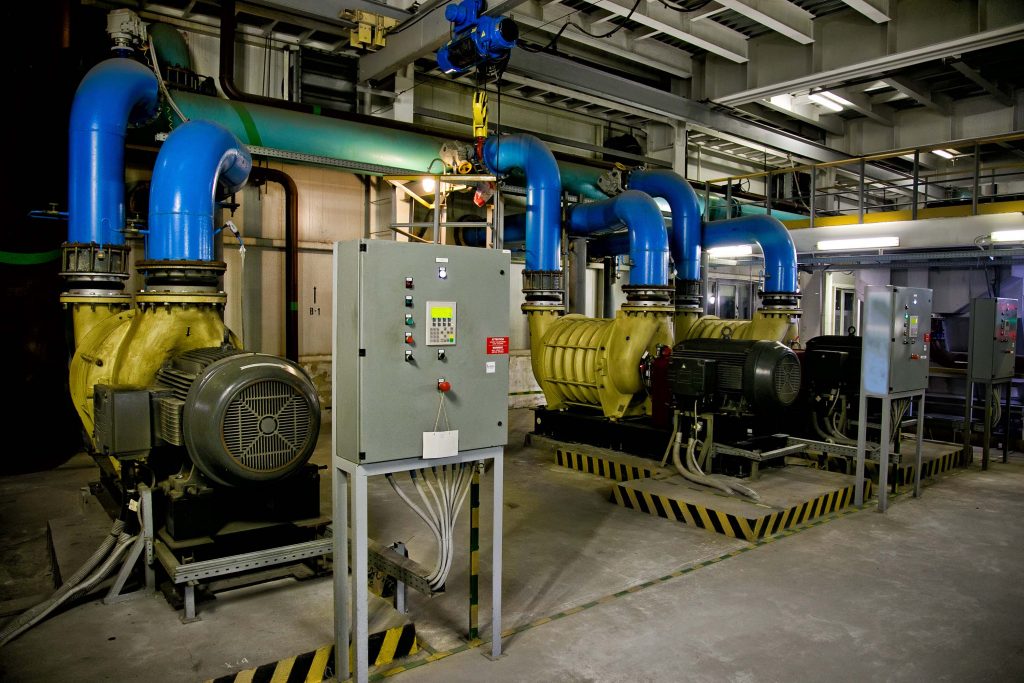 Treatment ponds and aerated lagoons (UP):

Treatment ponds are forms of biological wastewater treatment. There are shallow aerobic ponds with only bacteria and algae, facultative ponds with layers based on oxygen content and deep anaerobic ponds with a lot of organic matter but hardly any oxygen as you go deeper. Aerated lagoons are ponds that are oxygenated by surface aeration or diffused air aeration.

These consist of a shallow layer of stones, covered by slime containing the microorganisms. Wastewater trickles from the top as the organic matter is removed from it. Oxygen comes from circulating air. The effluent contains biological solids which are separated in a secondary clarifier.

Using a similar principle as the trickling filter, they contain rotating discs covered by a layer of microorganisms. This process is said to be more efficient than the activated sludge process.

Nitrogen is also an important pollutant that could cause algal blooms and needs to be removed. A nitrification stage may be a separate stage or combined with suspended or attached growth treatment. Here, bacteria convert nitrogen in the form of ammonia to nitrates which are removed by converting them to nitrogen gas. Other means of nitrogen removal include ammonia stripping, breakpoint chlorination, and ion exchange. 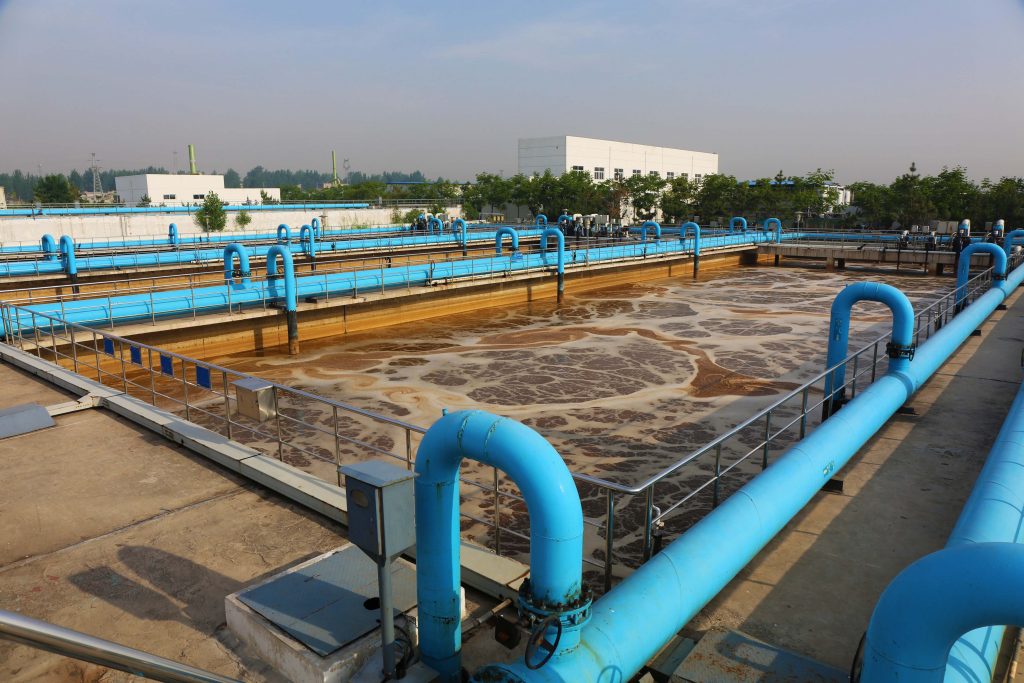 Sludge separation at the treatment plants

Now the water is clean enough to be discharged into waterways. The effluent may be reused for purposes such as drinking water, agriculture, non-potable water and so forth. Depending on use, higher-quality water may be required, so a tertiary treatment is performed by using processes such as filtration, carbon adsorption, reverse osmosis and electrodialysis.

Compressed air finds a number of uses in the treatment of effluents and wastewater. Air compressors connected to tubular diffusers provide dissolved oxygen for microorganisms in an aeration tank. The dissolved air flotation process uses air at a high pressure to bring impurities to the surface, where they are skimmed. A belt filter press is used for dewatering sludge, and the belts are pneumatically controlled. Air compressors are used to operate all valves and actuators in a wastewater treatment plant.